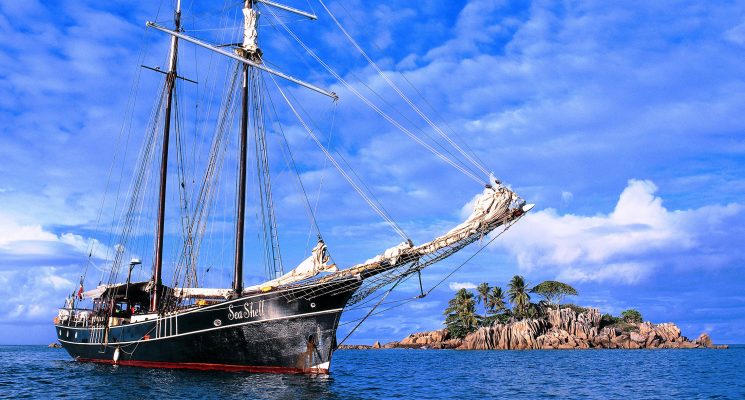 SEYCHELLES: A VIEW FROM THE WATER

From the perspective of a land-based tourist, the Seychelles islands represent a glamorous paradise with snow-white sand, rustling palm trees, outlandish birds, fish and more or less tame tortoises. However, there is a far more versatile and stunning picture – it opens up from the deck of a cruise liner, a yacht or a ferry.

In the classic version of the Seychelles vacation, a tourist envisions a first-class beach holiday enriched with a few excursions and, possibly, a fishing trip. Best-case scenario, this vacation, lasting 12-14 days, will include accommodation on 2 – 3 different islands, which will allow the travelers to enjoy and experience so much more in this one visit than if they have chosen to remain on just one island.

Then again, those tourists who decide to go on a cruise are privy to a much more diverse and awe-inspiring scenery. And it’s not just the snow-white ships languidly cruising from one island to the other in the azure blue waters. The diversity of tiny stretches of land in the Indian Ocean, to the right of the coasts of Africa and Madagascar, inspire more questions than answers, rendering speechless even those who have already checked the Seychelles archipelago off their visited countries list.

The number of cruise programs and routes is so great that they are difficult to classify, divide into types and categories. But that’s exactly what we’ll attempt to do. 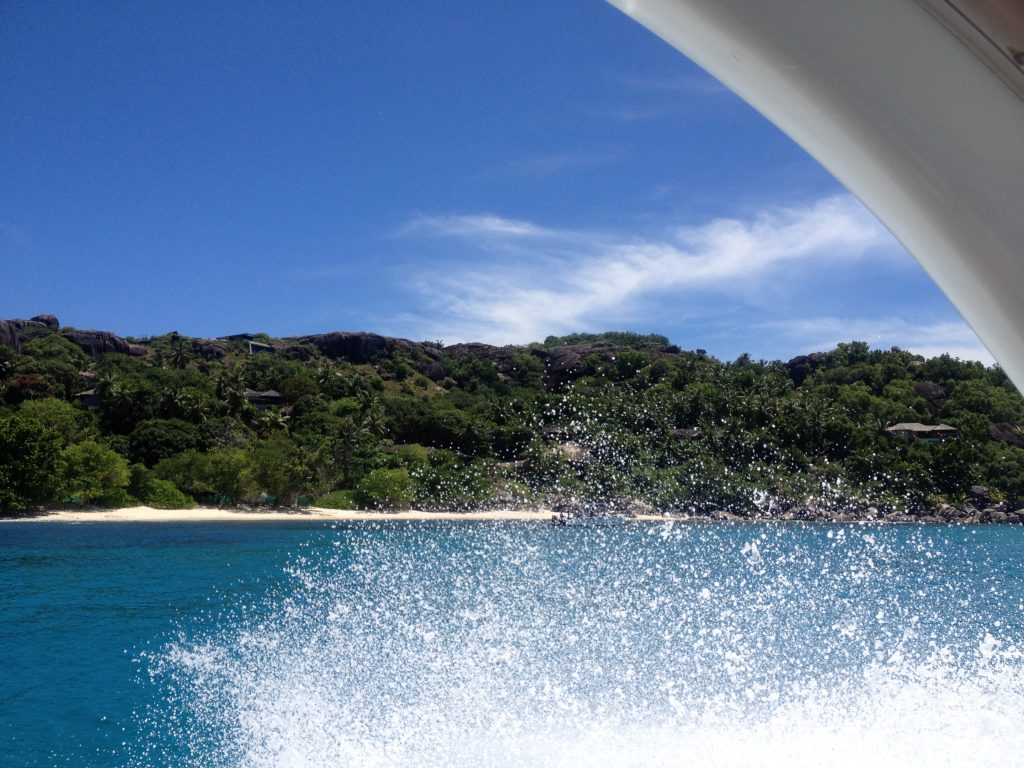 The majority of the Seychelles cruises are arranged within the imaginary boundary between the main islands.

One-day cruises designed for those who would like to either taste the unknown or rediscover the well-remembered Seychelles fall into the first category.

The program of such a cruise usually begins in the morning on one of the main islands – Mahe or Praslin, includes visits to a number of neighboring islands and marine reserves with a focus on a specific water area. For example, a cruise around the bustling northern part of Mahe or a trip dedicated to the far more savage south. Tourists have the opportunity to put themselves in the shoes of discoverers, disembarking in bays where access to land is either extremely difficult or simply impossible.

The second type of cruises is scheduled to last between 4 to 11 days. Provisions are made for an all-inclusive catamaran accommodation and an opportunity to explore a number of islands in just one trip. For instance, an 11-day cruise program includes visitations to the islands of Coco, La Digue, Cousin, Grand Soeur, Curieuse, Praslin, and Mahe as well as all the surrounding localities.

Cruises on this kind of scale are carried out on sailing catamarans, such as Marquises 56, Mojito 82, Eleuthera 60 just to name a few. These are magnificent floating mini-hotels intended for 8 guests; spacious and luxurious, with living rooms that are flooded with light, a panoramic view, a dining room, a bar, a cockpit and all the necessary utilities.

It is best to think ahead and free up as much space on the memory cards of your gadgets as possible. In the autumn-winter period, it is advisable to post such photos on social media with special care.

In the same time period as the classic beach vacation, the cruise program allows you to get a much more wholesome experience as a result of visiting so many places for the same price. The programs have become so popular that many tourists have been known to repeat certain cruise programs a bunch of times, returning to the Seychelles more than once.

There are also more spacious Pegasus catamarans, which can simultaneously accommodate up to 44 people.

And that’s not all. In the Seychelles, it’s easy to get caught up in the atmosphere that pervaded these waters 100 years ago. This particular sea “time machine” exists largely thanks to two historical schooners Sea Shell and Sea Pearl that has been preserved since 1915 and 1920 respectively. These sailing ships have undergone complete reconstruction and have been upgraded to a state-of-the-art level, still retaining the unparalleled allure of the past. 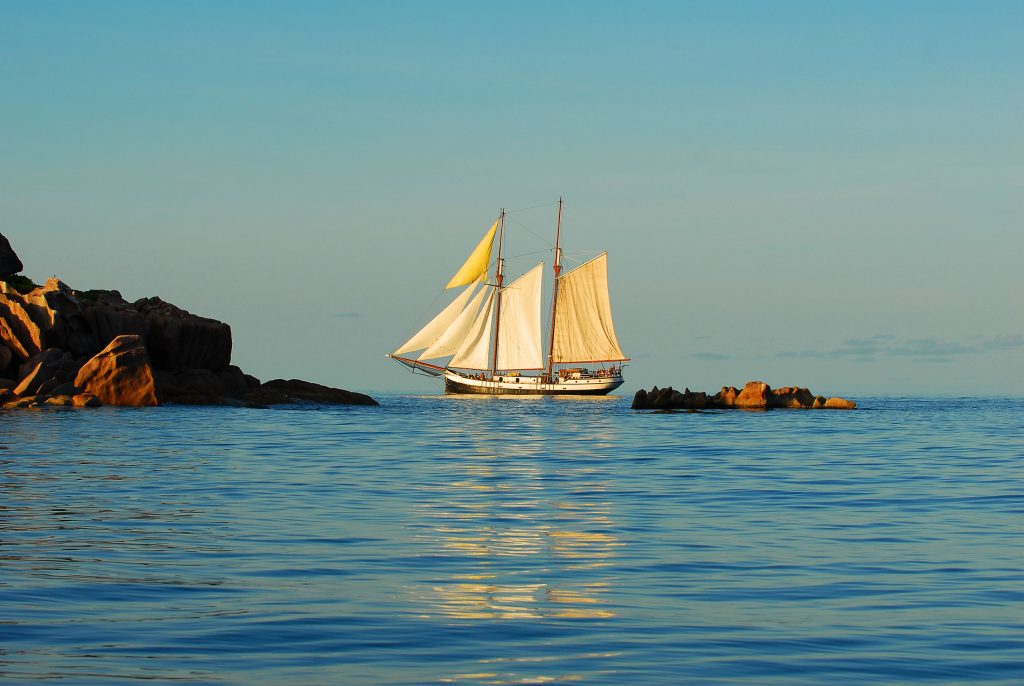 The next category of cruises describes personalized tours to those places where a special permit is required. It is worth noting that the Seychelles are scattered around a huge water area in the Indian Ocean: in addition to the largest and most iconic main islands (Mahe, Silhouette, Praslin, La Digue, Felicite), there are several groups of remote coral atolls, including the Amirante Islands, the archipelagos of Aldabra, Alphonse and Farquhar, as well as Bird and Denis Islands, located 60 miles north of Mahe.

The entire tourist, yacht, diving and fishing life of the Seychelles is centered on the inner islands. Admittedly, if so desired, you can choose some other exciting activity, like for example, a trip to the remote atolls. The most affordable option is the Amirante islands (consisting of 13 islands), which are about 200 miles away from Mahe. It takes twice as long to reach the Alphonse Atoll Group and the number of sailors who visited them is fewer yet. By comparison, Aldabra and Farquhar are downright lost in the ocean.

There are so many legends associated with Aldabra. Few fortunate souls aboard the Maya’s Dugong ship managed to witness this mysterious atoll during their oceanographic expedition. The functionality of the sailboat and the set-up of its main quarters laid the groundwork for conducting high-profile expeditions. Since 1966, Maya’s Dugong has been the research vessel of the Canadian government. In 2005 and 2007, major renovation was carried out, in 2009 the ship was overhauled, the necessary equipment was installed, and conditions for comfortable lodging were created in the cabins.

The waiting list for the Aldabra expedition is put together 1-2 years in advance and it’s still not enough to accommodate everyone, despite the event’s mind-boggling price. 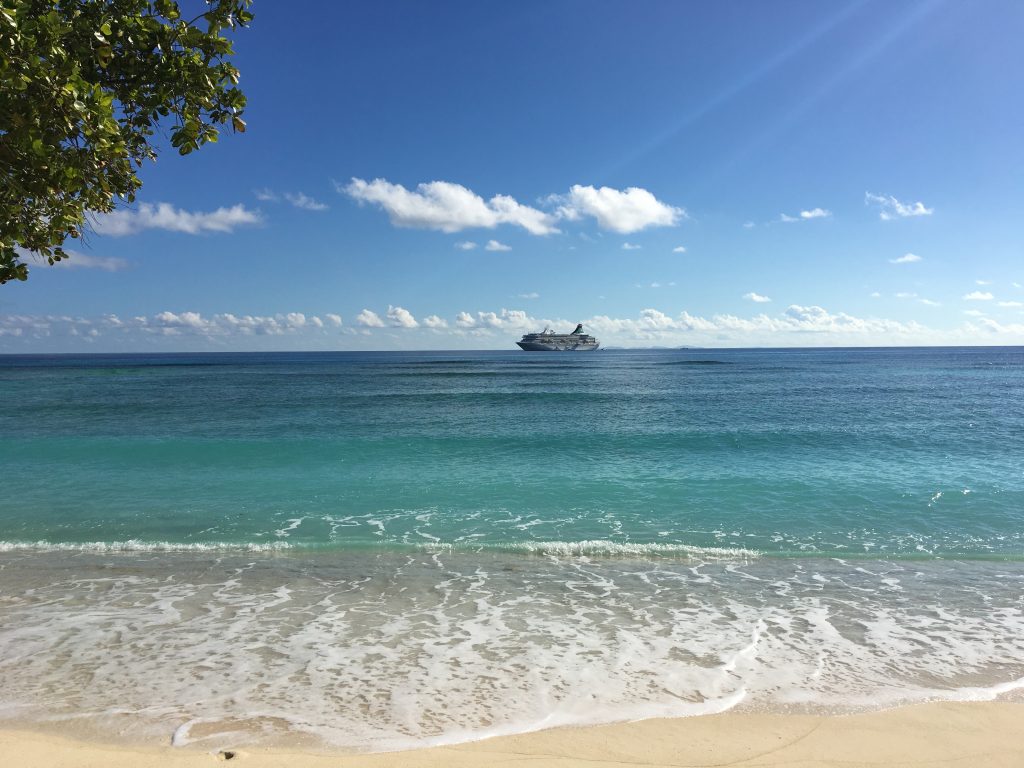 An attentive tourist could have noticed the appearance of a huge cruise liner in the Port of Victoria a few years back. That was a new guest in the Seychelles waters.

Snow-white magnificent giants Costa neoRiviera and MSC Sinfonia carry 1900/1400 passengers respectively, offering visits to such countries as Mauritius, Reunion, Madagascar and the Seychelles, slowly working up an appetite for each destination individually among the adventurous tourists who previously considered spending 10 monotonous days under a palm tree an unstimulating prospect.

It’s worth paying attention to the fact that while such cruise program won’t be enough for an in-depth insight into the destination, it’ll certainly help you reach an unambiguous conclusion: Seychelles are islands truly striking in their variability. It’s no wonder that many tourists from cruise liners, who have originally booked only excursions and fishing trips, by now, have already added the Seychelles to their future itinerary.

The country’s Ministry of Tourism, Civil Aviation, Ports and Marine has successfully worked out a promotion strategy for the Costa neoRiviera and MSC Sinfonia cruises, reckoning that they will briefly but colorfully showcase the country to future visitors.

There has been a significant increase in the number of cruise passengers over the past two years. And the total number of tourists in 2017 increased by 37% compared to 2016. Minister of Tourism, Civil Aviation, Ports and Marine Maurice Loustau-Lalanne is confident that cruise tourism had something to do with that.

Maurice Loustau-Lalanne announced that the Seychelles plan to introduce a number of additional expedition routes and replenish the fleet of cruise ships that will sail to other granite and coral islands of the archipelago.

The executive director of the Seychelles Port Authority, André Siso, said that great efforts are being made to make Victoria the best port in the region for tourist ships calling that will generate additional income for the economy.

Interestingly, over the past seven years, the Port of Victoria is a five-time winner of the “Best Cruise Port of the Indian Ocean” award, having secured the status of the most competitive and efficient port in the region. 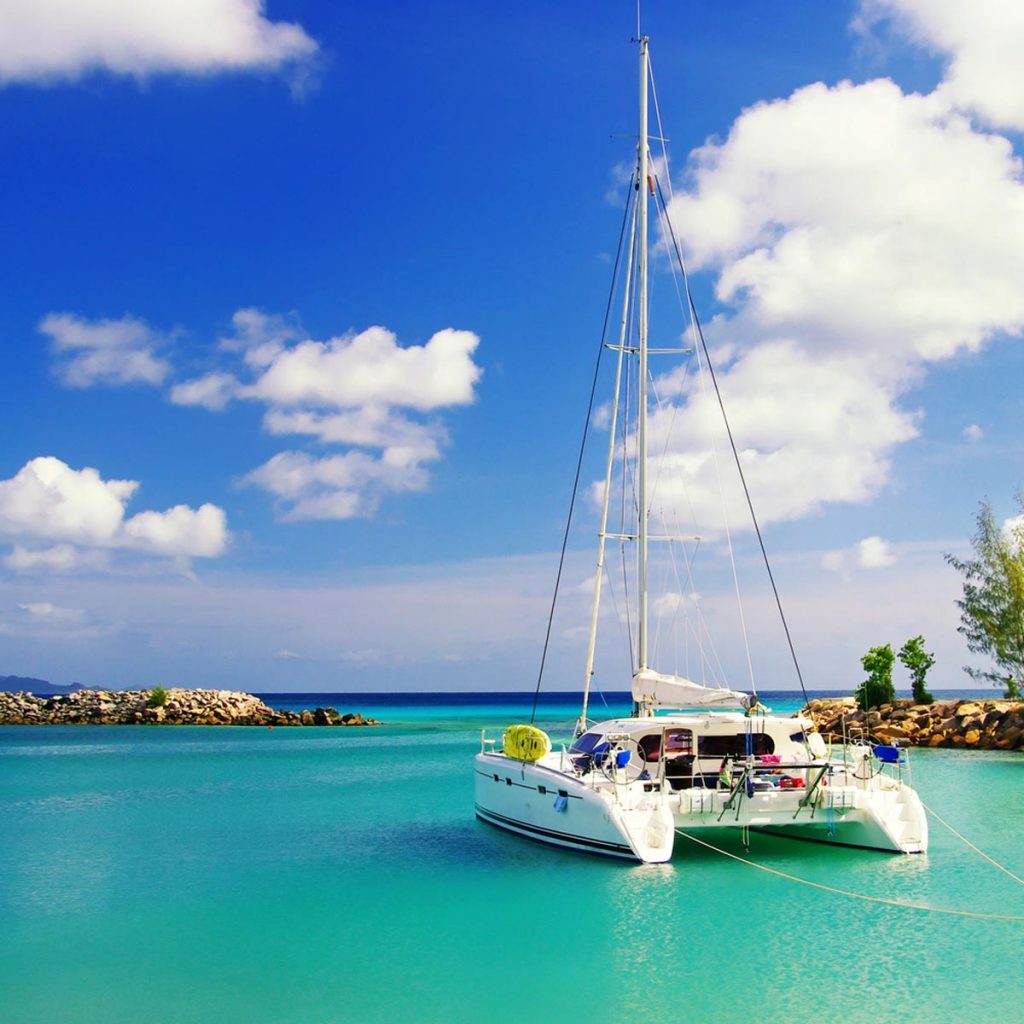 Anticipating the growth of cruise activity, the Seychelles significantly improved the logistics between two main islands Mahe and Praslin as well as La Digue. If, before 2006, one had to spend up to 2 hours one way on a ferry, accommodating up to 40 people, to get from one island to another, now it only takes a ferry 50 minutes to get from Mahe to Praslin.

Since 2007, Cat Cocos ferries, developing a speed of 35 knots per hour, have been added to the fleet. These ferries, the largest of which can carry up to 475 people at a time, run between Mahe, Praslin and La Digue several times a day. 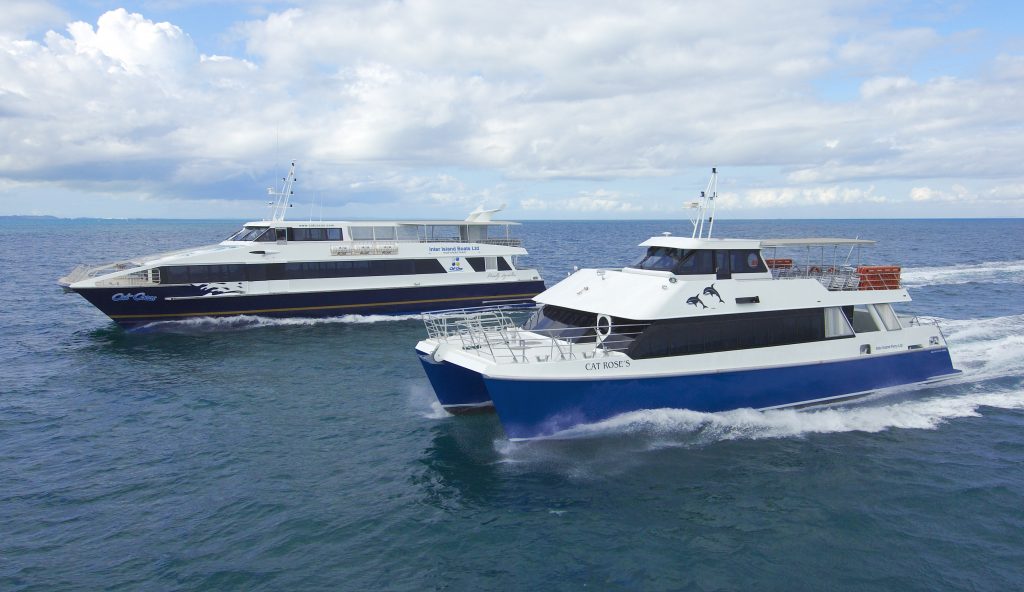